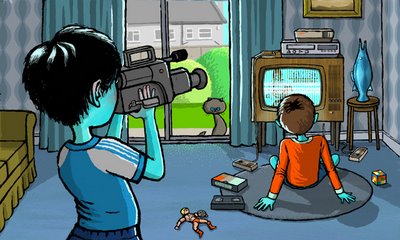 This is my final illustration for the Son Of Rambo project. For some reason my name isn't up on the title page, but you can see my image if you flick through from the start. I was trying for a more interesting composition with the boy close up and the viewer looking down slightly from above. The film is set in the 1980s and I hope I managed to get the feel across of one of those long hot school holidays - where you stay inside watching TV rather than going out in the sun. I'm old enough not to look back nostalgically on the 1980s really - it was a dreadful time to be honest.

My work is now up on my agents Arena's website here.
Posted by Frances Castle at 10:48 AM 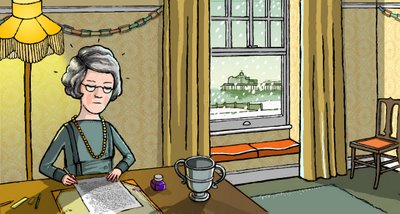 More personal work for the comic about the search for my family tree. This is my grandfathers aunt, Caroline Sherwin. On the first of January 1928, (in Eastbourne) she wrote down a brief family history -it took up one sheet of paper- and I used it as my starting point. According to Caroline the silver cup on the table was given in exchange for a horse and wagon to my 6th great grand father by The Young Pretenders army (Bonnie Prince Charlie) when they reached in 1745. The army stayed a couple of days in then retreated to . My relative followed them, and while they were resting in market place took back his horse and a cart.

All this is written down in quite a lot of detail, and I wonder how she knew it all, for instance the cart he brought back from belonged to a Mr. Bailey of Breadsall Derbyshire. I have no idea how to prove any of this, though according to the IGI there was a Mr. Bailey in Breadsall at this time.

Not everything she wrote down was correct; she has a couple of fathers and sons mixed up, and a wedding date that is definitely not right.

Caroline Sherwin died way before I was born and there are no photos of her either, so this picture is completely imagined. Caroline and her two sisters never married, and according to my mother lived in becasue they looked after a wealthy American woman.

Posted by Frances Castle at 9:45 AM 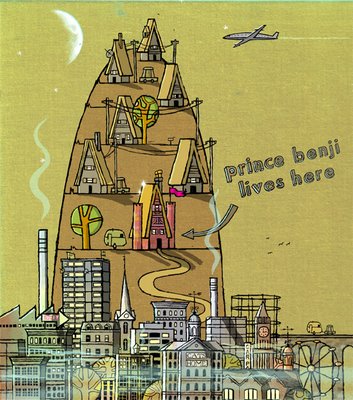 This is where Prince Benji lives, a sort of castle-style suburban house over looking the city. You might recognize the hill from the animation on my website. I didn't quite get the city how I wanted it. I was trying to get a sort of water colour shimmer to it. I've been looking at a lot of Peter Firmin's work.
Posted by Frances Castle at 9:46 PM